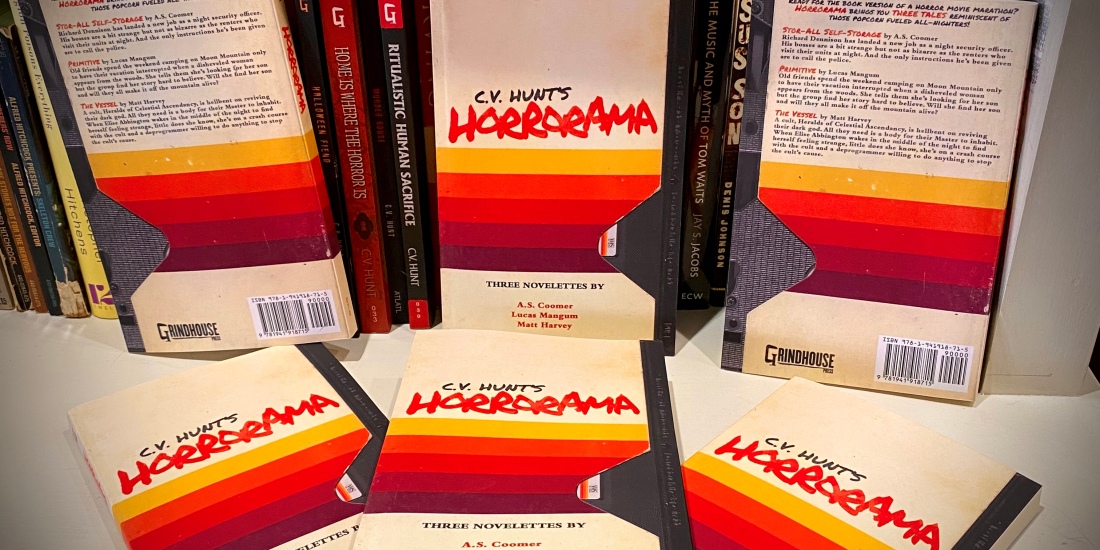 I’ve got five more copies of C.V. Hunt’s HORRORAMA back in stock. $15 gets you a signed copy & includes shipping.

$15 gets you a paperback copy of C.V. Hunt’s HORRORAMA which includes three novelettes: Stor-All Self-Storage by A.S. Coomer, Primitive by Lucas Mangum, & The Vessel by Matt Harvey. $15 includes shipping. Signed by A.S. Coomer.

Ready for the book version of a horror movie marathon? HORRORAMA brings you three novelettes reminiscent of those popcorn fueled all-nighters.

Stor-All Self-Storage by A.S. Coomer. Richard Dennison has just landed a new job at the Stor-All Self-Storage as a night security officer. The owners are a bit strange but not as bizarre as the renters who visit their units at night. And the only instructions he’s been given are to call the police.

Primitive by Lucas Mangum. A group of old friends decide to spend the weekend camping on Moon Mountain only to have their vacation interrupted when a disheveled woman appears out of the woods. She tells them she’s looking for her son but the group find her story hard to believe. Will she find her son and will they all make it off the mountain alive?

The Vessel by Matt Harvey. A cult, Heralds of Celestial Ascendancy, is hellbent on reviving their dark god. All they need is a body for their Master to inhabit. When Elise Abbington wakes in the middle of the night to find herself feeling strange, little does she know, she’s on a crash course with the cult and a deprogrammer willing to do anything to stop the cult’s cause.